After many requests following my talk in Aspire last year (Monitoring Load conference, Doha, Qatar, 2016) where I takled the metabolic power concept, I have just put together a written version of this specific section (that will also partly be inlcuded in a IJSPP paper written with Ben Simpson now available here)

Since Osgnagh et al. in 2010,13 who showed the potential application of the metabolic power (MP) concept8 for load monitoring in soccer, the interest for this variable has grown exponentially and is now used across many other team sports.6, 7, 12, 16 In fact, most GPS brands offer now the ability to monitor players’ MP, and a majority of practitioners use this variable when reporting.1 While we have been the firsts to be excited about the potential of this monitoring approach, we have since reconsidered our opinion and question now its usefulness in the field to monitor elite players (i.e., “Ferraris”). This is essentially related to i) recent research findings questioning its validity in the context of team sports-specific movements and ii) the fact that it is only an incomplete metabolic measure of internal load and probably too broad a marker of external load.

What do we actually measure?

It has now been shown by four distinct and independent research groups that locomotor-related MP assessed via either GPS or local positioning system (PGPS or Pmet in the figure below) differs largely from the true metabolic demands as assessed via indirect calorimetry (VO2 measures, PVO2). PGPS was actually reported to be very largely greater than PVO2 during walking,3 but very largely lower during shuttle runs at low speed15 and during soccer-,4 rugby-11 or team-sports3 specific circuits. 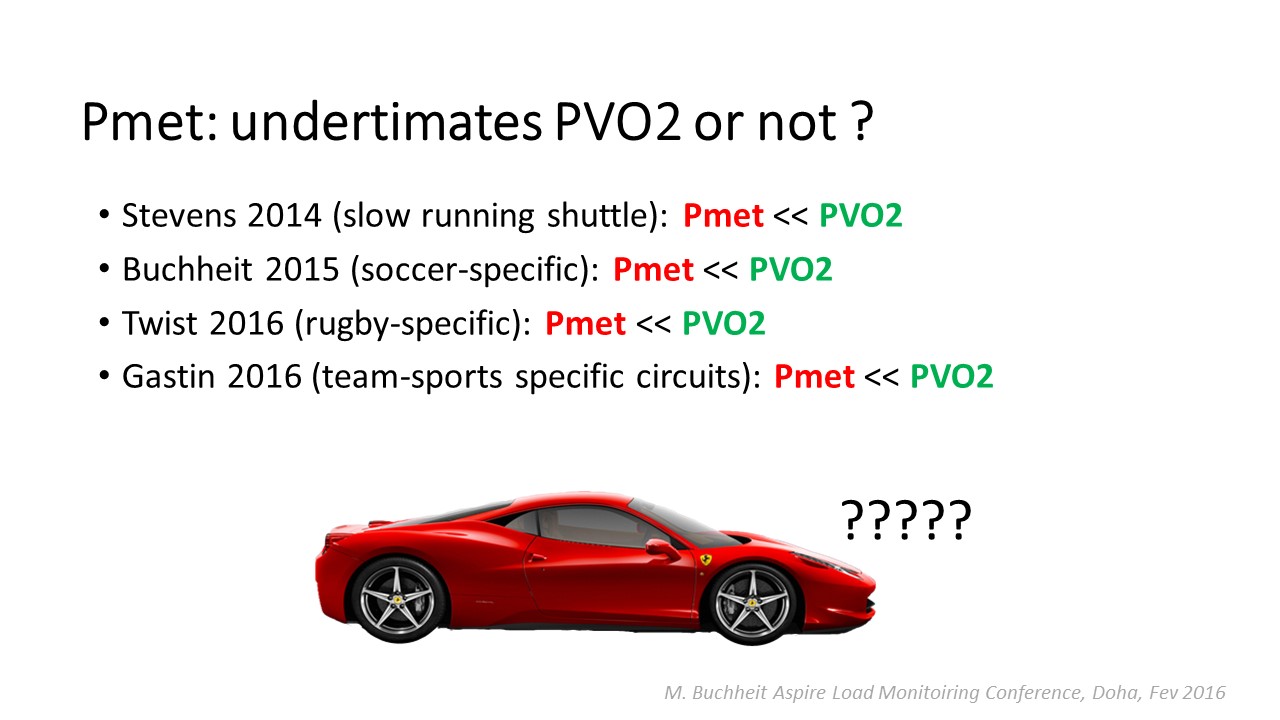 While some may see the consistency of such conclusions as a kind of consensus, Osgnach et al. wished to write a letter to the editor to defend their approach and criticize our methodology.14 Since we were not given the chance to respond to this letter by the IJSM editor (“you will not be invited to respond to this letter, but I am sure that you will discuss directly this interesting issue with the di Prampero group”), we wished to comment on their main critics in the present post. This should clarify some discussions and confirm the limitations of MP in the context of interest, i.e., monitoring team-sports specific efforts with the available technology on the market. 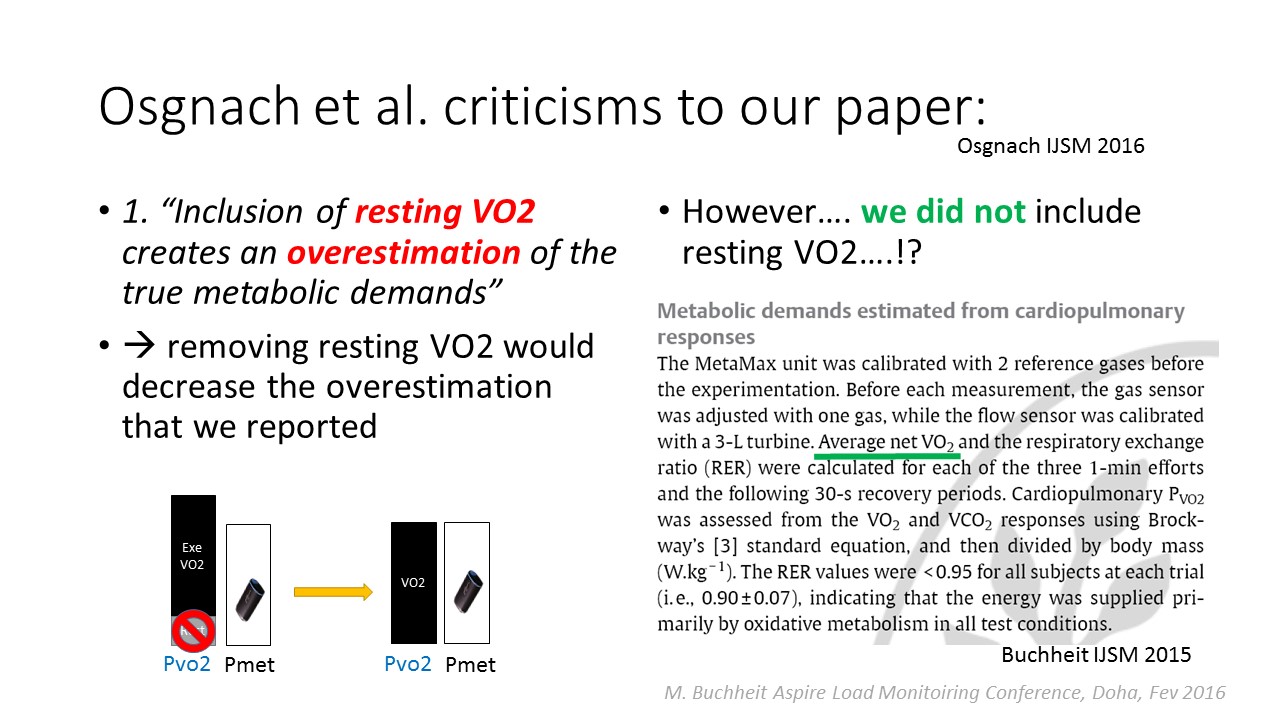 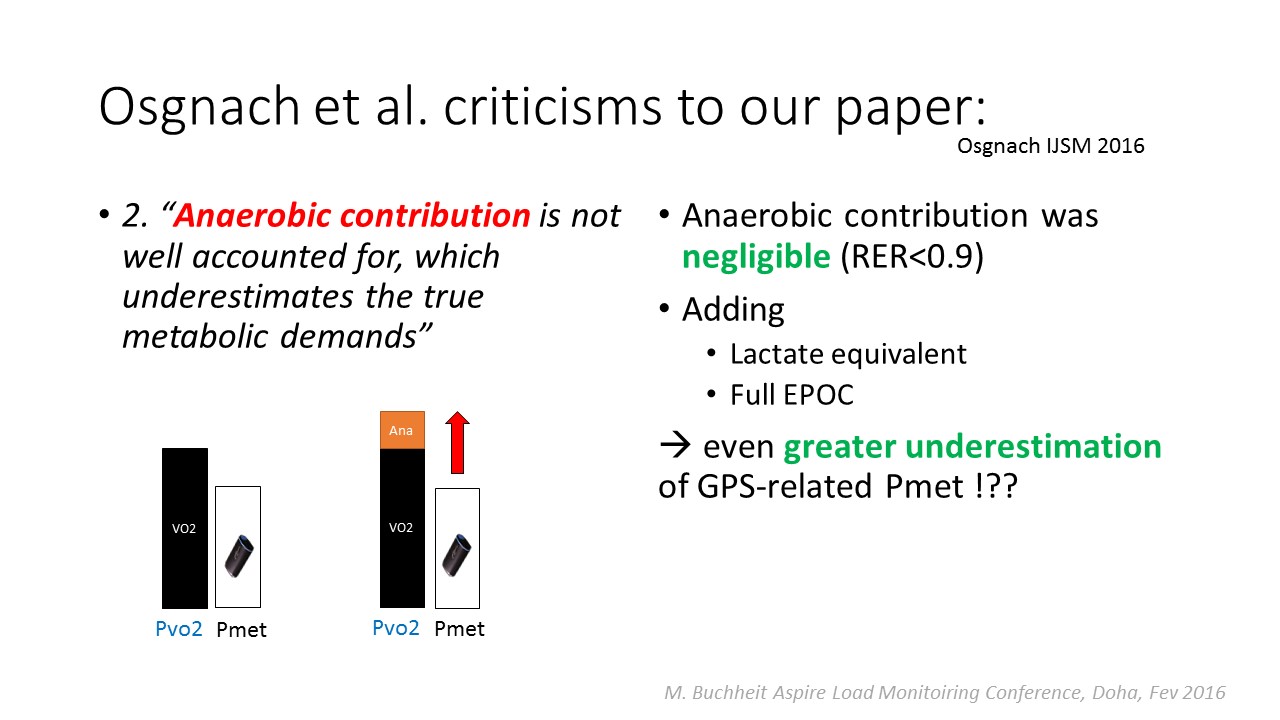 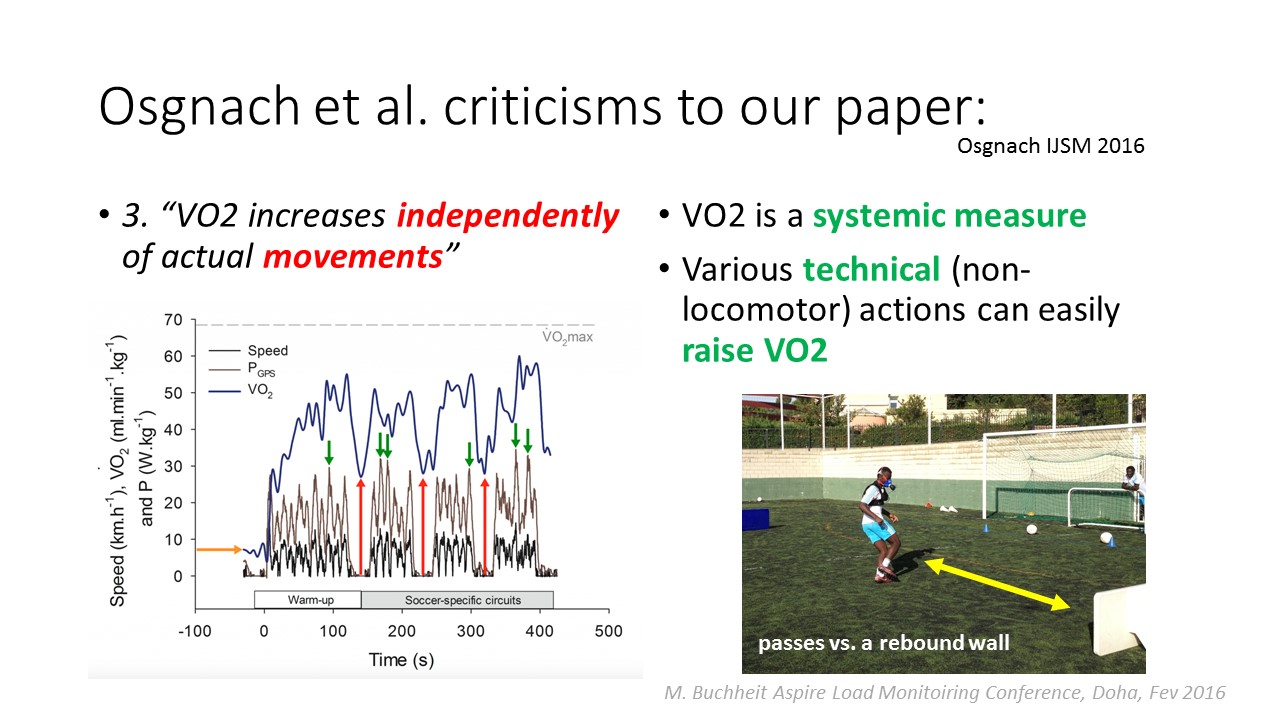 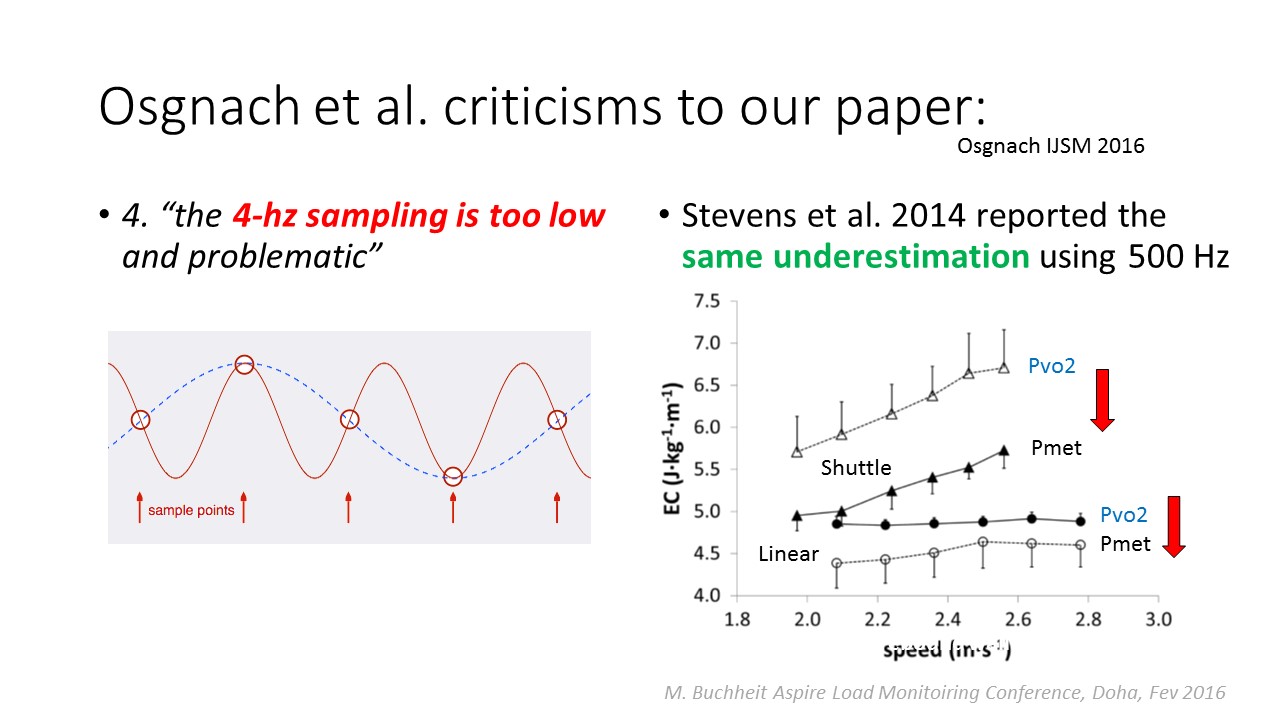 Considering that the agreement between PGPS and PVO2 has only been shown to be acceptable during continuous and linear jog and runs (but neither during walking nor intermittent changes of direction runs)3, the metabolic underestimation may be related to the fact that the current equation initially developed for maximal and linear sprint acceleration8 may not be well suited for team-sport specific running patterns (e.g., including rest, irregular step frequency and stride length, turns, upper body muscle activity, static movements).4 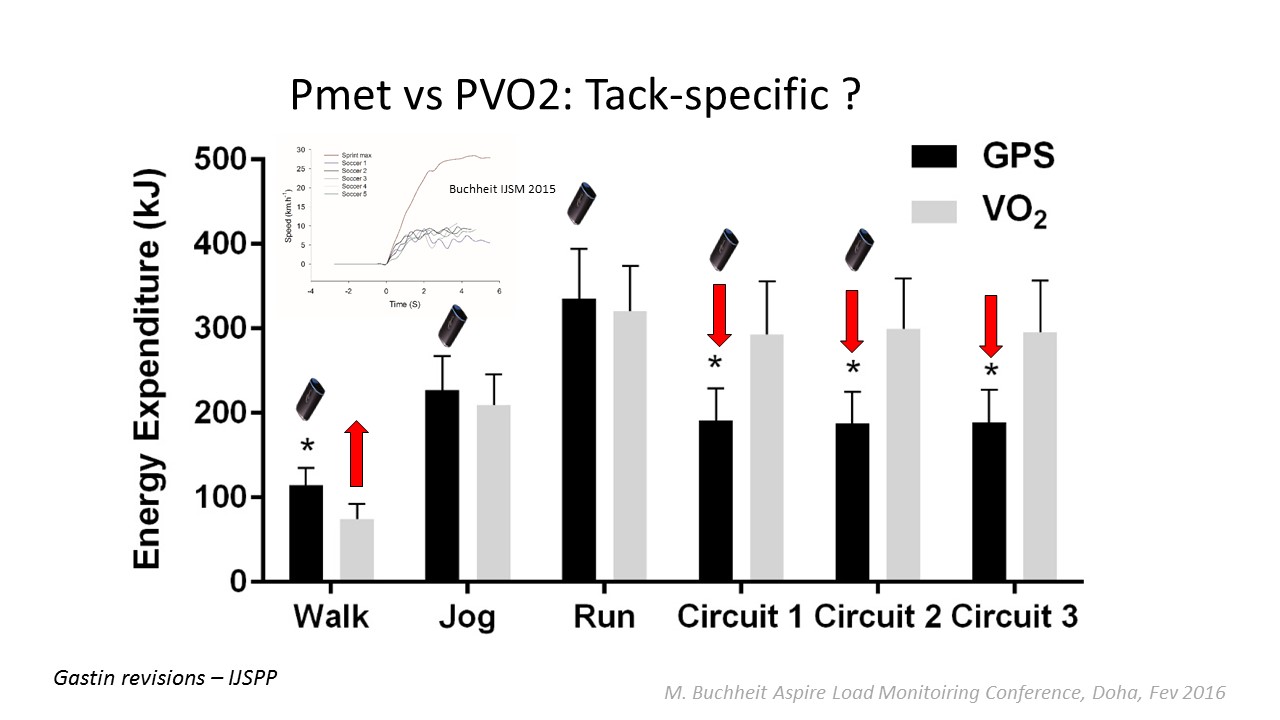 This suggests that the value of PGPS per se to monitor training load in team sports may be questionable. Its usefulness may also be limited with respect to practitioners’ expectations in the field. In fact, practitioners are likely seeking for: 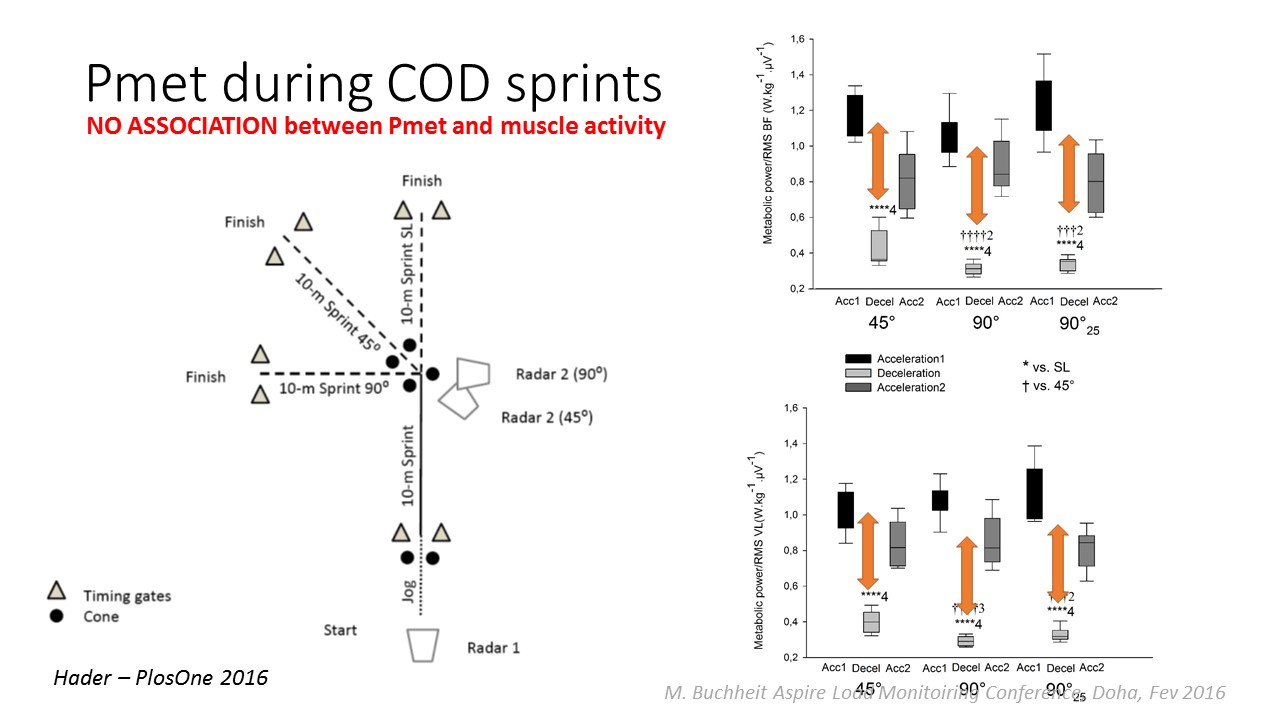 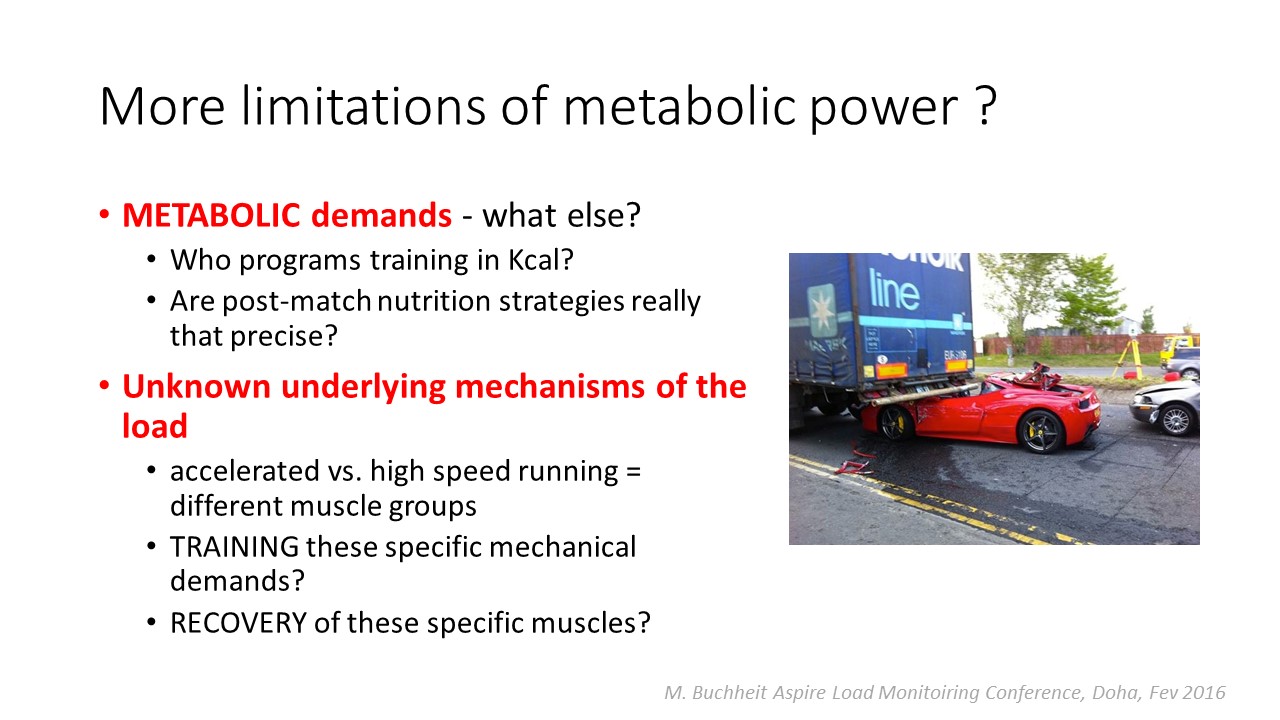 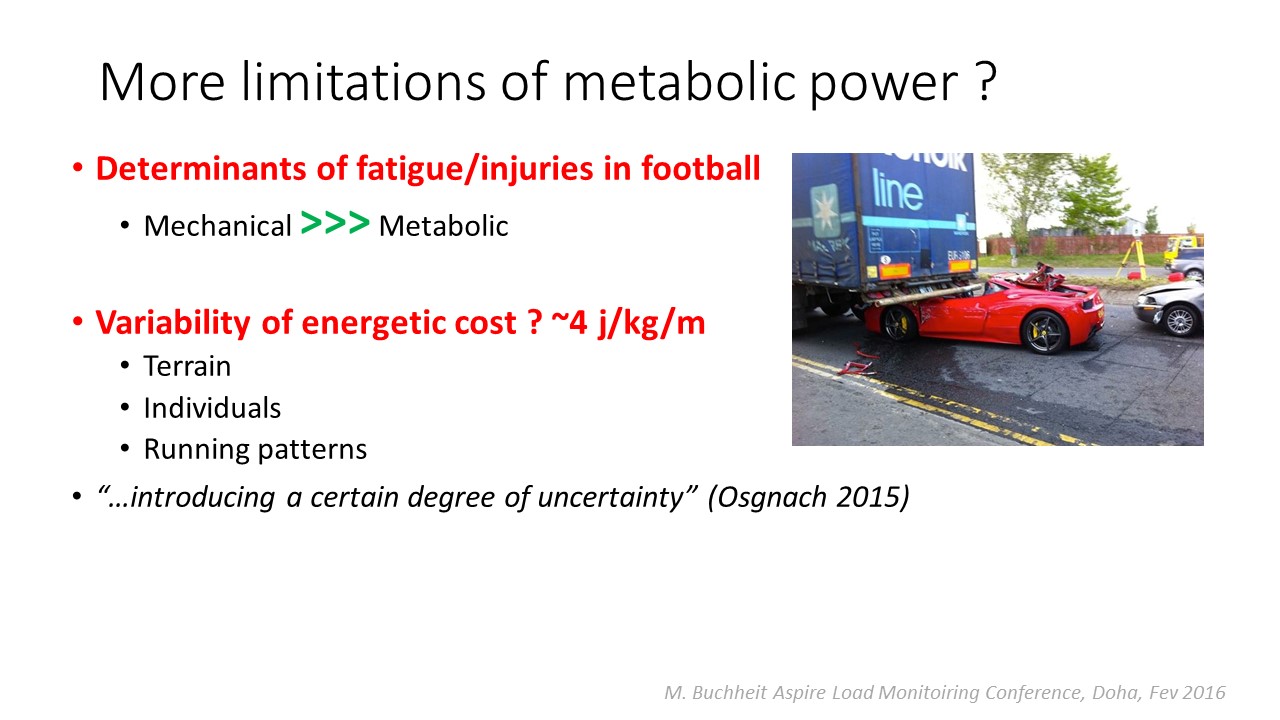 Until new evidences are provided regarding the validity of PGPS as a valid measure of overall energy expenditure during team-sport specific movements, and given the conceptual limitations (difficulties in deciphering the underlying mechanisms of the load), metabolic power assessed via the current technology (PGPS) may not be as powerful as we though to drive Ferraris.